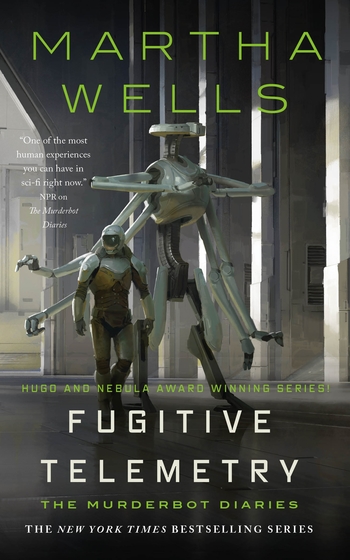 The newest novel  “Fugitive Telemetry” by Martha Wells is another wonderful exploration into the world of Murderbot, the part human, part robot security unit.  The following is from the book cover:

“No, I didn’t kill the dead human.  If I Had, I wouldn’t dump the body in the station mall.

When Murderbot discovers a dead body on preservation station, it knows it is going to have to assist station security to determine who the body is (was), how they were killed (that should be relatively straightforward, at least), and why (because apparently that matters to a lot of people – who knew?).

Yes, the unthinkable is about to happen: Murderbot must voluntarily speak to humans!

At Preservation Station, Murderbot is hanging out watching media, protecting his humans and hoping that there isn’t an attack from GrayCris. When a body is found, SecUnit is contracted by Station Security to assist in the investigation. The story takes off, pun intended, from there.

One of my favorite parts of these novels is the conversations that Murderbot has with himself in his head.

“The weapons scanner (which I was not allowed to hack, and which I wasn’t hacking) alerted on me, but it had my body scan ID on the weapons-allowed list so it didn’t set off an alarm.  (I have energy weapons in my arms and it’s not like I can leave them behind in the hotel room.)  (I mean, my arms are detachable so theoretically I could leave them behind if I had a little help but as a longterm solution it was really inconvenient.)  I was sure the weapons scanner would alert Station Security that I was in the area.”

The relationships that Murderbot has developed with the humans through the course of the novels continues to delight me. The quote below is about Murderbot determining who to call when he wants to break into a damaged transport.

So I called both of them.”

If you would like to read my reviews of the other five novels, click on their titles here: All Systems Red, Artificial Condition, Rogue Protocol, Exit Strategy and Network Effect

I can’t stress enough how well written these novels are. Martha Wells captures the balance between the robotic and organic sides of SecUnits personality. She also tackles questions and issues that pertain to planet on which we are living. For example, what does it mean to be human? Corporations verses human rights. And many other thought provoking topics throughout the series.

Creative, fun and an enjoyable read. I highly recommend “Fugitive Telemetry” and the entire series of Murderbot novels. I haven’t heard if there are more books planned for this series. I am hoping Martha Wells will continue to writing about Murderbot’s adventures well into the future.