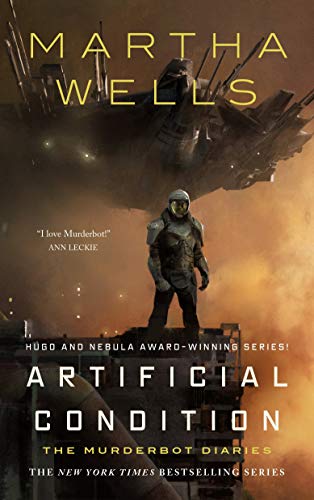 I just finished reading the book Artificial Condition by Martha Wells.  It is the second book in the Murderbot Diaries.  The following is the description of the book from the book cover:

“‘As a heartless killing machine, I was a complete failure.’

It has a dark past – one in which a number of humans were killed.  A past that caused it to christen itself Murderbot.  But it has only vague memories of the massacre that spawned that title, and it wants to know more.

Teaming up with a research transport vessel named ART (you don’t want to know what the A stands for), Murderbot heads to the mining facility where it went rogue.

What it discovers will forever change the way it thinks…..”

Artificial Condition picks up at almost the exact spot that All Systems Red, the first book in the Murderbot Diaries series, ended.  Instantly you are pulled into the quick wit and brilliant running commentary of Murderbot.

One can’t help but relate to Murderbot even though he is a machine.  For example: how many times has a news program come on and you quit watching or listening, turned it off or changed the channel because you just can’t listen to one more word.  It appears that Murderbot has similar “feelings.”  In the first paragraph of the book Murderbot explains why security units don’t care about the news.

“Secunits don’t care about the news. ….. [It] was boring and I didn’t care what humans were doing to each other as long as I didn’t have to a) stop it or b) clean it up.” -Murderbot

More interested in avoiding people and watching his pirated media collection, Murderbot hitches a ride on a research transport vessel that eventually ends up becoming his friend.  The addition of ART added a new level of sarcasm and comedic bite to Murderbot’s running commentary.  An excellent character addition to the story.

There were more than a couple times that I laughed out loud while reading this book.  Again, like the first book, the story grips you from the very beginning and doesn’t let you go until the very end.  Suspenseful but not horrifying.

Martha Wells is an excellent author.  She crafts conversations and descriptions of places with the same exquisite attention to detail.  A lot of thought and creativity went into this book as well as the entire series.

I cannot recommend Artificial Condition enough.  It is an excellent continuation of the story and what I have read of the series.  I can’t wait to read the next book Rogue Protocol.