There is so much more to Nevada than Las Vegas and “the Strip.”  48 miles North of Las Vegas is a state park that is well worth the drive to visit: Valley of Fire State Park.

According to the park brochure Valley of Fire derives its name from the red sandstone formations found within the park boundaries.  These formations were made from great shifting sand dunes during the age of the of dinosaurs, 150 million years ago.  Uplifting and faulting of the region and extensive erosion created the geological formations that is the landscape of the park today.

Other rock formations include limestone, shale and conglomerates.

When hiking along a canyon behind Atlatl Rock, we came across three big horn sheep.  They were very curious about us and we didn’t want to be in their way.

Petroglyphs from the canyon walls along a hike to Mouse’s Tank.  The rock art in the park is from prehistoric cultures which include the Basket Maker People and the Anasazi.  It is estimated that people inhabited the region between 300 B.C. to 1150 A.D.  Though due to scarcity of water these groups did not stay in the region year round.  They would have limited their length of stay and used the region for religious ceremonies, food gathering and hunting.

The lack of water did not stop an outlaw from using the area as a hideout during the 1890’s.  There is a hike to Mouse’s Tank which is a natural basin formed in the rock.  Water collects in this basin and sometimes remains there for months.

We were to early in the year to catch the springtime blooms.  However, I was very delighted with the color contrast of the orange sand and the beaver-tail cactus.

The White Domes area of the park has sandstone formations with contrasting colors.  There is a hike in this area that includes the slot canyon pictured above. 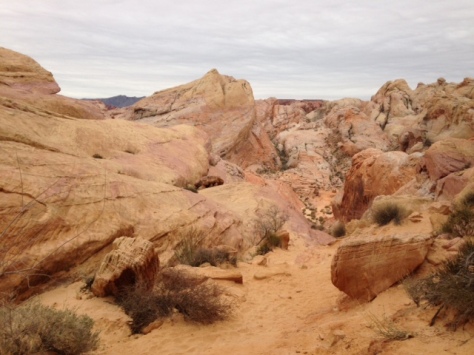 This picture was also taken along the White Dome Trail.

If ever you are in Las Vegas, Nevada and are looking for an escape into a unique landscape of vibrant colors with links to past, plan to visit Valley of Fire State Park.